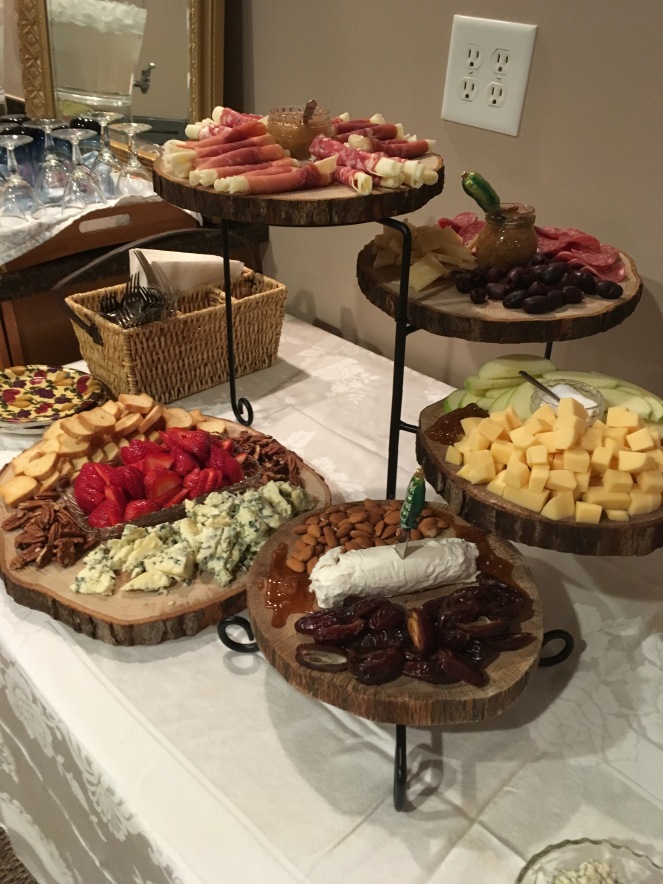 Strawberries here, blue cheese there, sopressata over on this tray by the piave cheese…I was arranging the most gourmet and snobby series of charcuterie trays I had ever attempted.  They were looking beautiful and delicious.  In my completely unprofessional opinion, if I were cool and savvy enough to use Pinterest or Instagram, they would be worthy of such sites.  Instead, I just have a quick cell phone pic to save for posterity…but I digress.

I was so excited for this party.  It was something I’d been thinking about for a long time and finally had planned.  It was to be a clothing swap where each lady brought clothes or accessories that they were no longer using, in hopes of taking home some nice items that were new to them.  And, like all of my gatherings, I hoped for everyone to feel welcome and safe and encouraged by conversation.  As usual, I invited anyone and everyone—casting my net wide so that God would send the right people who may not otherwise cross paths except for at my house.

Yet in the midst of arranging this loveliness I was fighting back discouragement.  You see, all day I had been getting text messages with people canceling on me.  Sicknesses and other unexpected things were rapidly shrinking my expected crowd of ladies.  I tried not to do the math in my head and count who was remaining.  When planning anything I always pray for the right people to be there, regardless of my personal expectations.  However, I am often short-sightedly disappointed at God’s idea of right.  I have big grandiose dreams.  I am a daydreamer with a big imagination of what could be.  My initial tendency is to expect God to do big and obvious things through my obedient steps of faith.  If I am walking in faith then shouldn’t water part before me and mountains crumble into dust?  If I am walking in faith then shouldn’t it always be obvious to everyone I encounter?  If I am walking in faith then shouldn’t I be walking on clouds in an ethereal setting, the golden sunshine illuminating my hair as though there is a halo…?  Wait a second…this walking in faith daydream suddenly became about ME!

I have good intentions in expecting God to show up in big ways—I really do.  However, I find I have to continually surrender my expectations and true faith is acknowledging He may be working “behind the scenes” in ways I may never see.  I have plenty of cool ideas, but my stories pale in comparison to the ones He is writing.  He can use small things just as effectively as big things.

Matthew 13:31-33 “He told them another parable: “The kingdom of heaven is like a mustard seed, which a man took and planted in his field. Though it is the smallest of all seeds, yet when it grows, it is the largest of garden plants and becomes a tree, so that the birds come and perch in its branches.”

He told them still another parable: “The kingdom of heaven is like yeast that a woman took and mixed into about sixty pounds[b] of flour until it worked all through the dough.””

So anyway, back to the evening party prep.  Where was I?  Yes, fighting discouragement.  I continued my party preps, almost feeling silly at how many details I had planned for the dwindling crowd.  It was like feeling over-dressed for an event you thought was going to be swankier than it ended up being.

I got another text, this one saying she was canceling because she got some terrible news and wasn’t feeling social.  Deep sigh…another cancel.  Unoptimistically I responded back to her saying that when I’m struggling with something I don’t want to be social either, however, I find that being in community is the most encouraging thing I can do.  I told her she was still more than welcome to come hang out, even if she was feeling sad.  She thanked me and said she would consider.

But by this time I had people arriving and I was busy instructing people to hang up clothes, set accessories there, etc.  And of course directing them to food and wine. Of the 16+ ladies I was expecting, the headcount was 6 including me.  A few people didn’t even contact me to tell me they weren’t coming—I just found out later why they didn’t show.  But then my friend with the sad news showed up and we were a group of 7.  7 ladies of all shapes and sizes and colors and backgrounds.  Each of the 6 ladies I knew for different reasons.  Some had met each other before at my house, some had not.

I had envisioned a bigger turnout.  But honestly, the 7 of us had fun.  At one point all of my children and my husband “crashed” the party and helped eat a ton of the snack spread I had out.  And after we had picked through each other’s leftover clothes and accessories, the ladies and I sat around and talked and talked and talked.  Because of the individuals who were there it was very nice and more laid back than I had planned—which is not a bad thing!  My friend with bad news ended up talking and laughing and enjoying herself too—which really made my heart happy.

The next day, as I “debriefed” with myself and mentally digested all that occurred, I was hit with a new thought that floored me.  Though I had planned bigger, God obviously intended for things to appear smaller in His infinite wisdom.  What if, just what if, God loves my friend SOOO much that He orchestrated the party just because He knew she would be having a rough day and need the community?  What if He inspired such random extravagance in my planning as a way to show His extravagant love for her?  What if He was planting a mustard seed, barely detectable to me, but something that is to grow exponentially into a huge blessing or ministry?

I got goosebumps at the revelation that God loves each of us so much that He would go to extraordinary lengths to show it.  He has deep love for my friend and provided her a safe place at the right time of vulnerability.  He truly is capable of big things that on the surface feel small to our flashy expectations.

Do I think that was God’s sole purpose in the party?  Nope!  Especially because I know other good came from it too.  With the leftover clothing and accessories I was able to answer a Craigslist add looking for help with clothing in sizes I normally would not have on hand.  I was able to give some of the clothes to one of the ladies who was unable to make the party.  And I was able to donate another stack of clothes to a ministry that gives clothing to locals who may need a little extra help.  Plus, the lessons of the evening are etched onto my heart—reminders of God’s great love and how we should not underestimate how and where He will show up.  Our steps that we take while walking in faith are not about where we think we are going—they are about where God is leading us.

I know I will continue to face discouragement when things don’t meet my expectations.  But, I can at least find peace and rest in the hope that God is working and writing a much better story than I could ever tell.

In other news…I had been on a quest to do something kind for a stranger.  Again, I kept thinking God was going to show me some big and grand opportunity, but it never came up.  However, I did get the chance to bless a stranger who was buying a piece of baby gear from me.  She is expecting a baby girl and I gave her some baby toys and a couple of brand new baby girl outfits I happened to have.  Again, such a small thing, but maybe I got to be a tiny piece of a bigger thing God is doing in the mom’s life.  Maybe the kindness was an encouragement to her on a tough pregnancy-hormone ridden day.  I’ll probably never know, and that’s okay.

On to my next challenge: 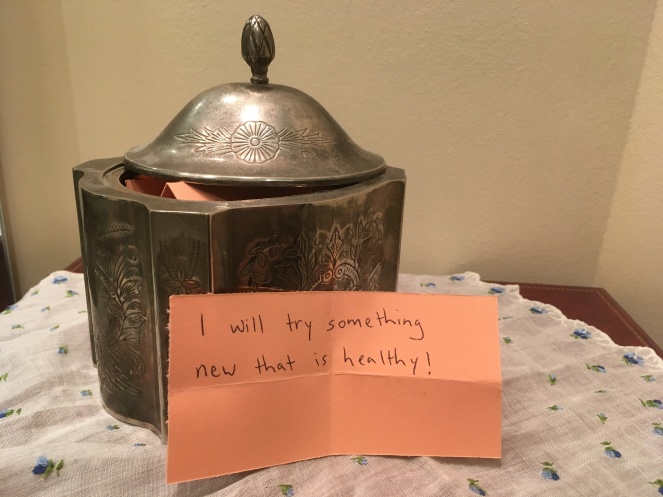 One thought on “God’s great love shown through meat, cheese, and wine?”